The Wolf Auction event poster in one of our frames

Fine Art Frameworks has recently had the privilege of creating a custom flat black lacquered pedestal for Jerry Garcia’s legendary guitar, “Wolf”, as well as framing the poster for this one-lot auction event with Guernsey’s Auction House at the Brooklyn Bowl on Wednesday May 31. An excerpt from the auction details on Guernsey’s website describes the guitar’s significance:

“Wolf was delivered to Jerry and first appeared in a 1973 New York City performance the Grateful Dead gave for the Hell’s Angels. Over the following two decades, Wolf became almost as well known as the performer himself as it was played in countless concerts and on treasured recordings throughout Jerry’s fabled career.”

The guitar was auctioned off by Guernsey’s first in 2002 for about 1 million dollars to a gentleman who has now decided to auction it off once again. We are happy to announce that this time, it sold for 1.6 million dollars. 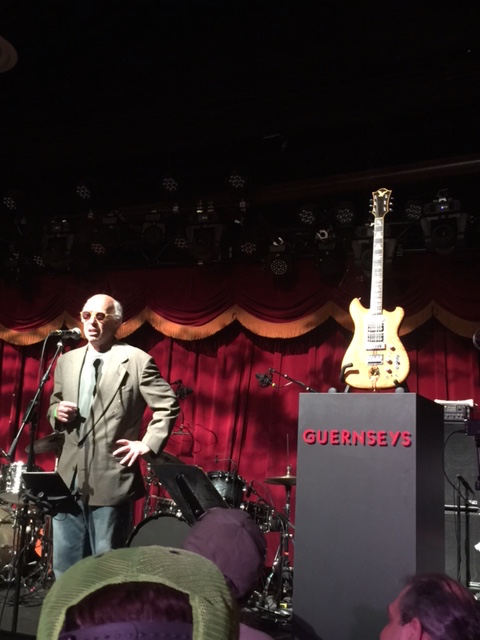 Alan Ettinger, one of the founders of Guernsey’s giving a speech

The evening was accompanied by the live music of Joe Russo’s Friends with Benefits, and speeches by some notable people such as the founder of Guernsey’s and Jerry Garcia’s daughter. The proceeds from the auction and the sale of tickets was matched by an anonymous donor and all the money was donated to Southern Poverty Law Center.

Guernsey’s remarked on the auction,

“Rarely, if ever, has an item as memorable and noteworthy as Wolf been sold to benefit such a worthy cause. Guernsey’s is thrilled that the return of Wolf will go a long way to combat poverty, racism and injustice across the country.”