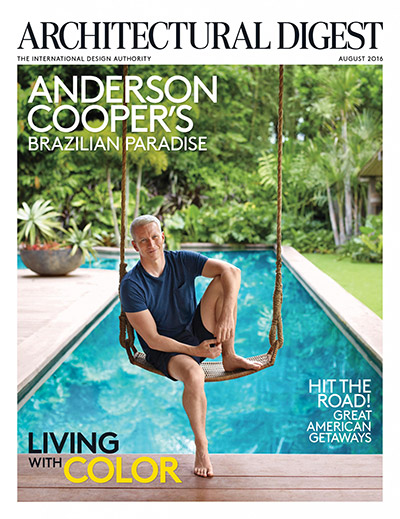 How many synonyms are there for the word color? If one has an abhorrence of repetition, it’s probably best to consult Mr. Roget before attempting to describe the Greenwich Village triplex of Ginevra Caltagirone, cofounder of the start-up production company BlushCo Films, and her four teenage and 20-something children. From the rose-tone dining room to the yolk-hued library to the master bedroom bathed in an intense shade of blue, casa Caltagirone is as polychromatic as a box of Ladurée macarons.

“I wanted to be bold,” the producer says, referring to not only the vibrant palette but also her decision to decamp from New York’s Upper East Side after 30 years. “I’d always lived within a 20-block radius, perhaps because of inertia. My last home, where my children grew up, was more subdued,” she recalls. “When I decided to move downtown, I wanted a place that reflects who I am and something attuned to the energy and diversity of the neighborhood.”

To help facilitate the triplex’s transformation, Caltagirone found the perfect collaborator in her friend Count Manfredi della Gherardesca, a London-based art adviser whose practice has expanded in the past decade to encompass interior design. “I am very anti-greige,” Gherardesca explains. “Ginevra had seen some of my other decorating projects, so she knew what my agenda would be.” His effervescent client puts a finer point on the subject: “Manfredi is an absolute genius with color.”

Occupying the upper three floors of a seven-story prewar building, Caltagirone’s residence was assembled from three separate units. Gherardesca calls the home an “aerial townhouse,” replete with 52 windows and an enticing 900-square-foot terrace that unfolds off the light-flooded solarium and library on the top level. The middle floor contains the living and dining rooms as well as the two elder children’s bedrooms, while the master suite and the other kids’ rooms are on the bottom level.

“We started by figuring out how to rehost Ginevra’s art collection and make it comfortable in the new space. She’s not a ‘storage collector.’ She’s an ‘I-live-with-what-I-love collector,’” Gherardesca says, rattling off a list of prominent artists whose works enrich Caltagirone’s surroundings, including Lucio Fontana, Anish Kapoor, Andy Warhol, Gilbert & George, John Baldessari, Richard Prince, and Jennifer Steinkamp. “Then we devised a specific color scheme for each room so that the individual spaces would have their own personality and mood.”

The count’s alchemy is particularly eloquent in the living room, which he painted a grayish mint-green. On opposing walls, a Jack Pierson installation spelling out ”DRUG DEALERS & MOVIE STARS” faces a Bill Viola video diptych of running water, while a François-Xavier Lalanne bar shaped like a mountain sheep commands one corner. Adding to the kaleidoscope of textures and tints are gilded-iron cocktail tables with luscious faux-shagreen tops and beet-red club chairs that pop like a Christmas morning against the room’s walls.

“Like the way I relate to art, I selected furnishings that speak to me—things that have character and soul,” Caltagirone says of the fanciful assemblage. She is especially enamored of the prolific 20th-century Italian designer and artist Piero Fornasetti, whose work—a blend of cheeky glamour and whimsy—is represented throughout the home in scenic wallpapers, textiles, vintage tables, and accessories. One of the more spectacular displays is the Fornasetti wall covering of operatic storm clouds that Gherardesca framed behind glass in the top floor’s seductive wet bar.

In Caltagirone’s house­hold, though, it’s the kitchen that sees the most traffic—she is, after all, Italian. “We cook every day, so it’s a room that’s made to be used. My kids come and go all the time, but somehow we always gravitate to the food,” she says. To give the taupe space a dose of idiosyncrasy, Gherardesca paved the backsplash with mismatched Florentine tiles that have all the color and brio of Matisse cutouts.

In the adjacent dining room—theoretically separated from the kitchen by pocket doors, though in truth they are very rarely unpocketed—the designer goosed the light-pinkish-purple background with chairs covered in oxblood leather and hung a 1950s Italian chandelier that reads like a kinetic sculpture overhead. A grid of lyrical Le Corbusier lithographs is displayed on one wall, and underneath it all is a carpet spangled with starbursts. It’s a daring mélange, but the primary impression—here, as throughout the apartment—is harmony rather than cacophony.

“It’s been a journey, making this home,” says Caltagirone, who is currently trying to get a documentary about the legendary American art dealer Ileana Sonnabend off the ground. “But being here, and in this neighborhood, has brought me incredible joy. I feel like I’ve found the correct place, the place I belong.”

Posted in News
Scroll To Top