When Nan Goldin took the stage as the honoree of Aperture’s Fall Benefit on October 26, The Ballad: Live, she spoke about the beginnings of The Ballad of Sexual Dependency, first published by Aperture in 1985. The book’s publication, she said, was thanks to curator and writer Marvin Heiferman, who introduced her work to former Aperture publisher Michael Hoffman. “If it wasn’t for him the book would have never happened,” she said of Heiferman. “We spent six months with the pictures laid out on the floor, reediting and reediting and reediting.” The resulting book, a seminal work of documentary photography, was the focal point of Aperture Foundation’s annual fundraiser, which drew more than 800 guests and raised approximately $700,000 in support for publications, public programming, and educational initiatives.

The event was co-chaired by Elizabeth Ann Kahane, Judy Glickman Lauder, and Anne Stark Locher. The evening, presented by U.S. Trust, centered on a live performance to accompany Goldin’s slideshow presentation of The Ballad, which depicts how her circle of friends and lovers lived during the late 1970s and early 80s. A performance by Laurie Anderson, Martha Wainwright, Pat Irwin, Samuel Rohrer, and The Bush Tetras scored the impactful, iconic images of a bygone New York City. 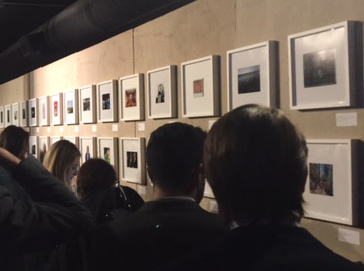 The influence of music on photography played into many other of the night’s festivities. The artnet-sponsored silent auction, “The Playlist,” gathered 100 photographs by artists such as Matthew Brandt, Olivia Bee, Hank Willis Thomas, and Larry Fink, inspired by songs from “Tiny Dancer” to “Blitzkrieg Bop.” A collection of songs about photographs, provided the soundtrack for DJ Bob Gruen, during the VIP preview, where guests mingled in Terminal 5 with prominent artists, gallerists, writers, and patrons in the world of photography. The benefit weekend had earlier kicked off with an array of VIP events, including an exclusive kick-off cocktail party at U.S. Trust, and studio visits with Letha Wilson, Hannah Whitaker, and Hank Willis Thomas.

Sara Friedlander, vice-president and head of evening sale at Christie’s, presided over the live auction, which featured eleven works by artists such as Richard Learoyd, Stephen Shore, LaToya Ruby Frazier, and Nan Goldin. Guests enjoyed hors d’oeuvres and dinner by Pinch Food Design as well as tequila sunrises by Espolón Tequila and other libations by Anheuser-Busch, and Wölffer Estate Vineyard. A DJ set by Mick Rock closed out the night.

Posted in Happenings
Scroll To Top